Good Color Intensity (For the Price)

A lot of Overlap Between Similar Colors

Artlicious is a brand that we recently came across that is attempting to compete with established art juggernauts such as Crayola and Derwent when it comes to low-cost, entry-level pencils.  Their 50-count set is becoming increasingly popular online thanks to its very low asking price and supposed good performance.

Artlicious offers a watercolor set of pencils as well.  But for this review, we will be focusing on their traditional colored pencils.

These pencils come with a 3.3mm wax core, include a round barrel, and fall comfortably into the budget price tier.

Artlicious advertises an adequate selection of colors that span the entire color rainbow.  With a 50-count set, you will still have some color gaps but they shouldn’t be huge compared to, say, a 24-count set.  If your budget allows, we always recommend going with the largest set that a brand offers.

When looking at the list of colors, some hues are a bit more emphasized.  Conversely, there are a few color ranges that could use some additional options.

For instance, there is a pretty strong selection of blues to choose from.  This includes colors such as “Blue”, “Azure”, “Royal Blue”, “Deep Sky Blue, “Cerulean Blue”, and several more.  We also found the choices of oranges to be quite abundant.

That being said, we did notice a lack of options in the yellow portion of the color spectrum.  The only colors that emphasized yellow are “Yellow” and “Mimosa”.  While yellow may not be a super common color to use for some people, others may find the lack of selection disappointing.

For the colors that are present, we found that similar colors seemed to be almost indiscernible from each other.  In other words, once applied on paper, you may have difficulty telling one color from another.

For example, for the life of us, we couldn’t tell the difference between “Grass Green” and “Green Yellow”.  Other instances of this were present when comparing “Blue” to “Royal Blue”, “Forest Green” to “Green”, and “Strong Red” to “Red”.

Because of this, your true selection of actual diverse colors is filtered down from 50 to more like 40. This may not be a huge deal but it is worth noting.

Another issue that we had was with the color on the barrel and color swatch not matching what came out on paper.  There are some noticeable color variations so we highly recommend creating your color swatch before using it so that you have a good idea of what the true color being outputted is.

Now let’s move on to the actual color performance.

We found the vividness of color that was produced to be a bit underwhelming.  However, it is important to remind ourselves that these are ultra-budget pencils that are designed to compete with the Crayolas of the world, not the Faber-Castells.

When considering this, the color intensity isn’t all that bad.  We found that the most intense colors lie in the oranges and reds.  The grays and blacks can produce some deep color but it will require multiple passes through.

Wax bloom is about average.  We noticed that it started to build up as you layer 4+ colors on top of each other.  This will result in the sort of “sheen” that you are used to seeing with wax bloom.

We like the core size used in Artlicious Colored Pencils.  At 3.3mm, it is a nice medium between being large enough to spread good levels of color and small enough to still allow for good user control.

Blending is about average.  Since there is so much overlap between certain colors, blending two colors may not be as big of a necessity here.

We had some good luck with starting with a primary color and then lighting it up with a white pencil as opposed to a lighter version of that particular color.  Conversely, darkening up colors was best achieved by going in with a deep blue or black pencil.

Seeing how these aren’t the watercolor pencils offered by Artlicious, we didn’t delve into how well they blend with water or solvents.

One major complaint that we had with these pencils was how easy it was to break the tips.  The wax core appears to be made of a recipe that results in them being a bit too brittle.  This means that when you push down pretty hard in an attempt to produce deeper color, you run a pretty good chance of breaking or at least cracking the tip.

In all honesty, we did get the hang of what the application pressure threshold was after an hour or so.  After that, we didn’t have as much of an issue with it.  But for some who naturally like to push down hard while coloring, the constant breaking tips may become a huge headache.

There is also a small manual pencil sharpener that is included with the set.  We aren’t huge fans of it (we found that our Prismacolor sharpener fared much better) but we appreciate Artlicious at least trying to add more value to the purchase.

Seeing how affordable the Artlicious Colored Pencils are, we weren’t expecting much in the way of packaging.  And sure enough, you will be stuck with the good ole’ fashioned cardboard box that you are used to seeing on budget pencils.

The pencils themselves are equally Spartan.  You won’t find the complex multi-color dipped bases and fancy metallic leaf fonts that other pencils that cost significantly more offer.  But for many people, this isn’t a huge setback.

The pencil barrel comes with the Artlicious brand name and pencil type (“Fifty Series”) printed in the middle.  Below this is the color of the pencil stamped in the same colored font.  We couldn’t find anything in the way of color codes or lightfastness. This would be helpful information to have on the pencil.

The main selling point with Artlicious Colored Pencils (and a big reason they are so popular) is their asking price.  They are extremely affordable!

And quite frankly, at this price point, it makes it easier to overlook some of the issues.  For a beginner pencil or a pencil for a classroom setting, these pencils will do just fine.  They won’t be as robust as some of the other classroom-friendly colored pencils that we have tested (that come with thicker, stronger cores) but since these are so cheap, you can go through a lot of them pretty quickly without too big of a hit on your wallet. 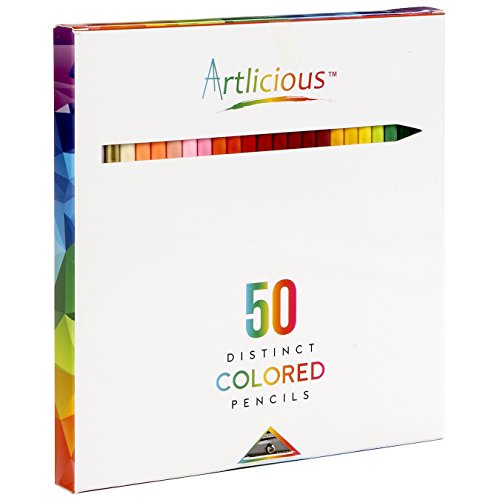 We appreciate Artlicious Colored Pencils for what they are: an affordable, entry-level colored pencils for both children and adults.  However, where they will shine is in the classroom setting or for someone who enjoys casually coloring without any concern for having the most cutting-edge pencil.

There are some issues worth noting.  These include some noticeable gaps in the available color selection, some difficulty in deciphering the differences between certain similar colors, and a relatively weak inner core.

But there are some bright spots as well.  Compared to other colored pencils in this price range, the color intensity is more than adequate.  And you can introduce more advanced coloring techniques such as blending and shading with these.

Overall, we are sort of middle-of-the-road on these.  If you are getting them for your child to learn to color with then they are a fine choice.  But for someone with a more advanced artist skillset, we recommend spending a bit more money on a superior pencil from another brand.