What are the Best Metallic Colored Pencils?

Of course, the best way to learn is to grab some paper and experiment but for the sake of convenience, we will outline some of the key points here.  Also, we will list what we feel are some of the best metallic colored pencils you can purchase online.

In general, metallic colored pencils will have pretty deep pigments.  This can allow them to jump off the paper when applied.

They will also oftentimes be on the softer side, which allows for a pretty thick application since a lot of the core can come off with each pass.

In regards to colors, they will usually come in very bright colors such as pink, neon greens, and lights blues as well as “metallic” colors such as silvers and golds.  Other tweaks such as the inclusion of shimmering flakes into the core itself or having slightly higher wax content to give them a bit more sheen is not uncommon.

A typical application of these will be in particular areas that are intended to “jump out” of the paper.  Most of the time you wouldn’t use metallic colored pencils to fill a large, dull background such as a hazy sky on a landscape or for more subdued tones such as human skin or animal fur.

Exceptions to this would be modernized works such as cityscapes, science fiction works, or a variety of abstract pieces.  Of course, any items you are drawing that are metallic in real life would go well with these pencils.  A gold necklace, for example, would look great if a gold-colored metallic pencil was used.

To keep things short and simple, we will list some examples of things that metallic colored pencils work well on and also list some things that you might be better off trying conventional pencils on.

Signs or messages you want to jump out

Most areas on a typical landscape

Now, for the record, we hate to make a blanket statement that metallic colored pencils won’t work for certain applications.  It just may take a bit more creativity than when using traditional colored pencils.

As always, we encourage you to experiment and try out some new approaches!  However, we would probably not encourage you to purchase a metallic colored pencil set if you plan on doing a ton of landscapes or something that traditionally doesn’t use a lot of metal colors.

Check out this video for some great additional metallic colored pencil tips:

What to Look for In a Metallic Colored Pencil Set

When shopping around for a metallic colored pencil set, a bit more research might be necessary to make sure that you get what you want.  There are two primary reasons for this.  First, typical metallic colored pencil sets are quite small, with many only being a dozen pencils.  This means that a lot of colors that you might want may not be in a particular set.  Because of this, you will either need to purchase multiple smaller sets or purchase a larger set that has more selections.

Second, despite their claims, many metallic colored pencils aren’t that “metallic” in the application.  Some people who are looking for a shiny, sparkly color output will be disappointed when they see the actual result.  Sure, they will usually be on the more vivid side since the hues are brighter selections, but for those that are wanted a truly metallic feel, it is important to try out a few different sets and see what works for you.

Also, it is important to great a mental road map of where you plan on using metallic colored pencils in your piece of artwork.  Metallic colored pencils can be very intense and, if not used properly, could end up producing results that aren’t to your liking.  Because of this, make sure that you start your application slowly and have a plan of attack.

Now that we have gone over the key points of a metallic colored pencil, what they work well one, and what to look for, we want to list a few of our favorite choices that are available online.  There won’t be nearly as wide of a variety of selections as you would have with your conventional colored pencil sets, so you might have to be a bit more flexible with what is available.  Also, these are typically meant to be used in conjunction with a traditional colored pencil set so be prepared to have one on hand nearby.

We like these, especially considering that they carry the coveted Faber-Castell name.  The color application is quite strong and you can put down some color, especially when applying to dark paper.  The color selection is a bit limited, but it does cover all of the necessary metallic requirements such as gray, copper, gold, and teal.  Also, several do put off a somewhat shimmery metal output, which a lot of its competition can struggle to do so.

This is a lesser-known brand that most people probably haven’t heard of.  However, they do bring a viable product to the table with these colored pencils.  Despite only being a 12 pack, there is an interesting color range.  In particular, they have a nice variety of greens and blues, which makes this a good set for flower and coral scenes.  They also put down a pretty deep color.  However, they don’t have much of a metallic feel to them which would have been nice to see, particularly in the gold and silvers in the set.

We did a full review on these, but they are still worth mentioning here.  A very professional-looking set that carries the respected Derwent name as well as its great blending and deep color application.  However, similar to the Heartybays, they are a bit lacking in looking actually “metallic”.  We do like that they have a wider variety of colors to choose from, including some nice orange, yellow, and red options to go along with the blue and green. 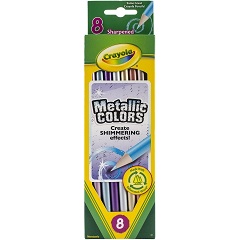 Crayola is always a good choice for those that are more budget-oriented, so they are worth mentioning here.  The color choices are a bit lacking, with this set only consisting of 8 pencils, and the available colors having a bit of an overlap.  This is a bit of an interesting set in that some of the colors truly do put out some impressive shimmering qualities while others are very dull.  They seem to be on a case-by-case basis but they are quite affordable so it might be worth a try considering the price.