The two primary and most popular colored pencil cores are wax-based and oil-based.  More precisely, oil-based cores will still generally have some wax in them but will be of high oil content.  There will be various other additives that are included in the core to give each pencil a unique color, texture, and many other characteristics.

However, some subtle universal characteristics generally exist when working with oil cores and the same can be said for pencils with wax cores.  So the big question is which is better?  Oil?  Wax?  Unfortunately, that comes down to personal preference and even then a lot of people enjoy both, depending on the brand and circumstance. 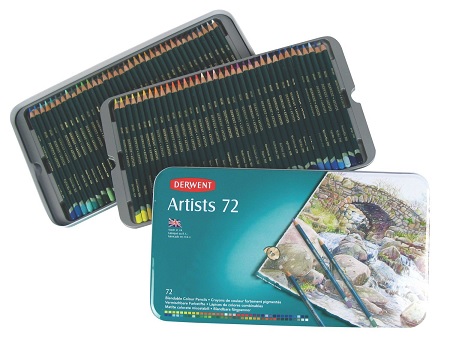 Wax-based pencils are by far the more popular of the two.  If you were to grab a random set of colored pencils from the store it is most likely that they are wax-based.  Wax pencils are generally cheaper and much easier to locate.  There will also be more color selections, shapes, and sizes.

Also, they can be easier to erase and lighter than oil-based cores.   However, wax bloom can be an issue, especially if some sort of fixative isn’t used.  It is generally more prevalent in heavy layers and when applying darker colors.

Wax bloom is basically where the wax binder comes to the top layer of the color and creates a cloudy haze over the pigment.  There are ways to avoid it such as applying in lighter layers or with the help of a spray fixative, but it can still be a bit of an inconvenience.

In some (but not all) wax-based cores there can also be issues with the pencils being less durable since the core is softer. But honestly, this varies greatly and variables such as application pressure, manufacture, etc. play a huge role.

Oil-based pencils are more specialized and you will often have to go out of your way to search these out.  One of the most popular lines of oil-based pencils is the Faber-Castells, particularly their  Polychromos sets. They are generally somewhat pricey so for the casual user they may be a bit impractical.

Wax bloom, however, isn’t an issue with these, and as such a fixative normally isn’t needed.  The color application can also be unique and has a very fun feel to it!  The harder core means that they may be a bit more durable and sharpening them to a fine point might not be quite as laborious, making these better for intricate areas.

However, generally being a harder core, the color output can be on the light side so additional passes may be necessary depending on the brand and desired look.  They can also smear somewhat easily so extra precaution needs to be taken.

Overall, both types are great and the differences aren’t too extreme or significant.  That being said, some artists swear by one or the other so the best way to find which one you prefer is by trying a few of each out and coming to your conclusion!